Phishing Is Too Easy - 3

Last week I received another traditional phishing email; apologies for the lack of images because my email account is setup not to load externally attached pictures. Here it is, with my address removed: 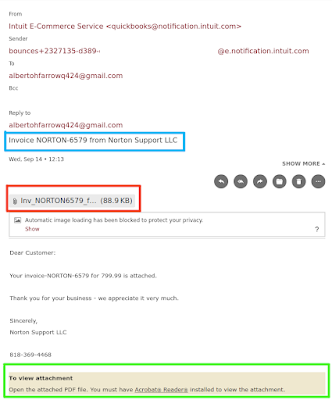 Yes, this is pretty much a variation of the last one I commented on months ago, namely:

How effective it is? I think it depends on where people will focus on. The phishers hope their marks will see the value of the invoice -- $800 -- and immediately open the pdf to find out what is going on. The best thing to do here is stop -- but not stop/drop/roll as you are not on fire -- whenever you see something suspicious, specially when it claims to be urgent. Then ask yourself if you expected an invoice from Norton. Then look at the email addresses and see if they are not overly suspicious.

Remember: phishers are lazy, and they hope you are equally lazy!