Phishing is too easy

I only remember going in a boat fishing once. And did not catch anything. And had to help with engine problems all the way back to the dock. So I can't claim to be a fisher for I never learned and endured the hours of being pooped by the mocking seagulls while waiting on fishes who were much smarter than we give them credit for fall for the lure and get stuck on the shiny hook by the end of the line. There are many man, women, and children who are very successful in the way of the fish; I am not one of them.

Phishing is a completely different story. It is very easy to do. You can call it caveman-easy but you would be then insulting the cavemen. And yet, it is extremely effective.

Businesses (should) worry about being hacked since a breach costs them money and reputation. So, they (should) do their best to prevent the bad guys to get in by patching servers and services and deploying firewalls and making sure their mail and web servers are will not let anyone try to log in. Of course their problem is exacerbated because while they need to protect against any possible attack, the attacker just need to find one weak point to get in. And the easiest way to achieve that is through social engineering.

Since this blog deals with social engineering and the lesser technical aspects of hacking, your Pavlovian reaction to when I say handshaking is two hands -- no assumptions of where they have been -- holding each other and maybe shaking:

and that is exactly not what I have in mind. Instead, let's leave the realm of squishy beings and go to computers. There when a device wants to talk to another, it starts some kind of handshaking protocol to establish connection parameters and authentication. Once that is successfully established, data transfer begins.

But, how does that apply to people (I was going to say humans but it might be too politically incorrect)? So we have two people, Red and Blue, which are named after the web series of, well, the same name. They meet somewhere and start talking 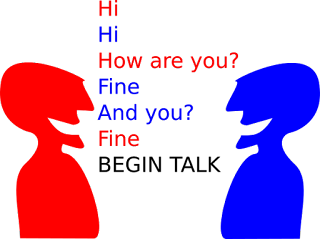 There are a few subtle variations (Red might reply "I'm fine too!"), but the main point is they may be talking to each other, but they are not yet holding a conversation. In fact, they are in the handshaking phase that, as in networked devices, precedes the actual exchange of data, which is represented above by the "BEGIN TALK" line.

he difference between them and machines is that they really have not said anything; this was just a ritual learned by rote.

If you want to test how mindlessly people go through this handshaking protocol, change a bit your answers and see how they react. Here is an example I have tried at a store: 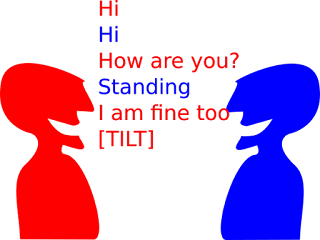 As you can see, Red

The basis of Social Engineering as applied to hacking is to identify the expected pattern and use it to persuade others to help you achieve your goal. Expect to see quite a few examples here.