There and back again: DEFCON 30 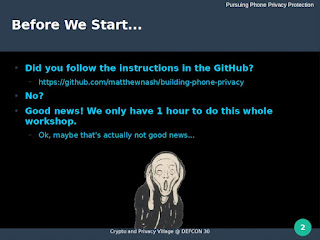 No, I did not postpone posting about my trip to DEFCON30 until now because I did not have anything to post this month. The truth is I was slacking. There, I said it.

This will be a bit of a post morten of our workshop. Will this post have any useful info? Don't hold your breath; what I can promise is there will be many opportunities to laugh at our expense.

For those who read the announcement for our workshop at the Crypto and Privacy Village, you know that there are two authors -- Matt and yours truly -- who put together the mess without killing each other; the fact we had half a continent between us probably helped.

Originally, the plan was to start with an explanation of why this phone privacy thing was so important and then get show how to do it. Ideally people would have read the announcement, followed our instructions, and show up with a phone ready to be configured. While one of us would be on the podium, the other would then be helping the audience.

After we had the entire workshop done and did a few dry runs, we started thinking: how many people will bring a phone that meets the requirements? Probably not many -- not many people have spare phones that can take CalyxOS or LineageOS in their kitchen drawer -- and we will not be able to bring enough loaners as all the resources in the workshop are coming out of our own pockets. We could just shrug it off and tell people "Hey you did not bring a phone, so we will bore you with screenshots."

Thing is, we had taken a lot of screenshots of everything we would be showing in the phone, in case we would not be able to share the phone screen or point a camera at it. So, this was an option but we felt that would detract from the workshop; instead of being something interactive it would be no better than watching a video.

We needed a plan B.

What if we provided an emulator? It will not do everything a real phone can but it will allow the audience to follow along on their laptops. Since we were going to focus on CalyxOS (we had only an hour to run the entire workshop; compromises had to be made), we then decided to create that image, make it available somewhere, and then update the wiki with instructions on how to use it. We also asked the Crypto and Privacy Village (CPV) people to add a single line in the workshop announcement, indicated with a green line in the picture below, to tell people they should install Android Studio in their laptop. 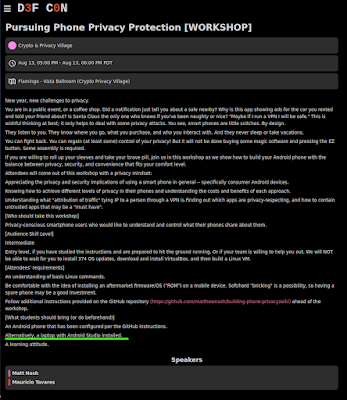 The plan was to have everything finished two weeks before the event and then take the last week to practice, and ensure we had a reliable way to hand out the emulator images.

Things did not happen according to the plan.

Matt was able to go to DEFCON from the beginning of the event; I do not know if he also was able to stop by BSidesLV. I, on the other hand, was a bit more time constrained: I flew the first flight on Friday and was going to return on Saturday after the workshop. In any case, we were going to try to attend as many events and talks as possible, and meet up with people we have not seen in ages. I also planned on volunteer to the CPV.

There are probably more things that went wrong, but I cannot think of them right now. Bottom line is we spent most of the time that week working on these bugs. And, we made it work.

The CPV people did a great job. Everything was working smoothly on their side. I did most of the overview and then Matt took over for the technical part:

You will note on the above picture the audience (picture was taken from the back out of respect) has set some chairs apart for social distancing's sake. I then came back from the podium sporting one of my favourite shirts (bonus points if you recognize it) with the final comments and we then took questions. After it ended, Matt was surrounded on the podium with members of the audience for a long while until the Defcon Goons kicked us out. 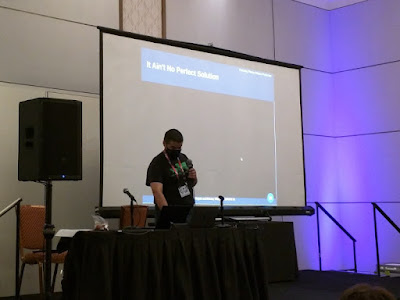 Thank you for all the fish